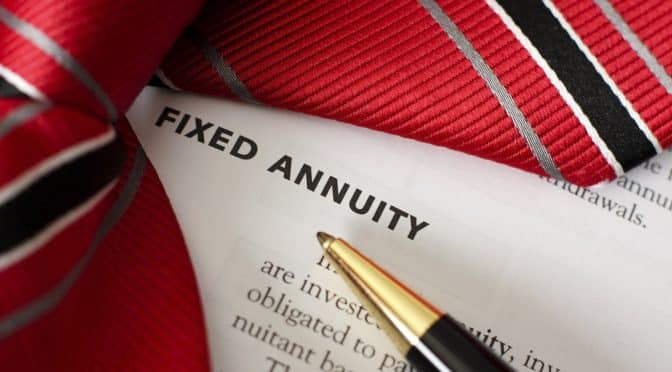 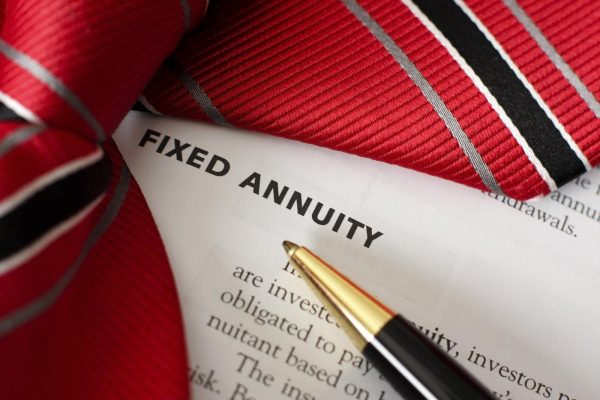 What is the TIAA Traditional Annuity?

The TIAA traditional option is an annuity. Its purpose is to provide a more concrete alternative to mapping out your retirement. It pays a fixed percentage of interest towards your contributions in your account that are guaranteed by TIAA.

This option could be helpful for someone who abstains from risk or volatility within the market as it is a very “safe” investment compared to other options. However, anytime you approach investing with a more conservative approach, you must consider the effect of what you’re giving up.

In the risk/reward scale, we know that choosing more conservative investments will hinder an investor’s chance of significant gain. Alongside that is the inability to keep pace with the cost of living. That’s certainly something to be concerned about as it’s the highest it’s been in thirty years! Understanding this potential tradeoff between risk and reward is where learning the details of each decision within this TIAA account can help to fill the gap.

For those with a more long-term focus, there could be an opportunity to alter their plan to one that could be more comprehensive and sustainable throughout retirement. In general, money within the TIAA traditional annuity is ‘locked up’ to allow TIAA to invest in longer-term, illiquid investment options to help its investors get a return. However, there are various withdrawal options available.

One way to use your annuity is to annuitize the annuity. All that means is that your current investments could be used for monthly income throughout retirement in a way that is best suitable for you. When you elect to annuitize, it is a non-reversible decision. So, be absolutely certain you want to do this before you elect it!

The payout options from annuitization are numerous and will depend on your specific annuity contract, so we can’t get very specific on all of the withdrawal options in this article. But the good thing here is that if you need it, you’ll have options for guaranteed income that can survive you, and even your spouse, for a designated duration.

The other withdrawal option for the TIAA Traditional Annuity is to take what is called a Transfer Payout Annuity. This option is paid out over ten payments in equal installments into a Rollover IRA retirement account, or bank account of your choice.

Many people like the rollover option because it gives them the flexibility to access money on their own terms, invest their assets into more diverse funds with the potential for higher long term returns, and also allows them to keep a portion of their money tax-deferred for longer.

Simply moving the money over to your bank account could be used for instances where you need help with everyday cash flow needs. Any payment taken from the TIAA annuity and moved to a bank account will be taxable and subject to income taxes.

Is TIAA Annuity a Good Investment?

We encourage owners of the TIAA traditional annuity to work through a long-term retirement income plan to determine if this source of income will be important throughout retirement. Receiving retirement income from other places like Social Security or a pension could play a role in deciding how to optimize your strategy.

If you have other pensions (such as IPERS), or large Social Security benefits, it may be advantageous to get money out of the TIAA traditional annuity and into more flexible options. Likewise, if your spending in retirement will vary over time and includes large one-time expenses (like a retirement home, bucket-list vacations, or new cars), having all your money locked up in an annuity may make retirement planning more difficult.

The safety and guarantee around the TIAA traditional annuity makes it a good option for those who are retiring with very little fixed income. If you have other sources of liquid retirement savings invested in stocks and bonds (like a 401(k), Roth IRA, or traditional IRA) and the fixed income that the TIAA annuity can help fill a need for regular spending, it can be a great option.

Likewise, the TIAA annuity does have some downsides. Once the annuity is annuitized and providing you fixed monthly payments, depending on the withdrawal option you select, you will not see an adjustment to this amount over the years as inflation increases. This means that over time the value of the cash flow provided by this annuity will drop dramatically.

Also, the returns on the TIAA annuity are locked in. If your retirement plan requires additional growth in your investments to be successful, you may want to elect other options. For example, below is a few numbers taken from TIAA about potential payouts of the annuity.

Annuity vs Other Retirement Savings

Is the TIAA annuity right for you? As we said above, the answer is “it depends”. But we can provide additional figures to help you make a decision.

Let’s look at 2 examples. First, a young investor who has many decades to save before retirement.

Using the TIAA Annuity Calculator, TIAA estimates that this investor would receive about $2,908 per month or $34,896 per year beginning at age 65. 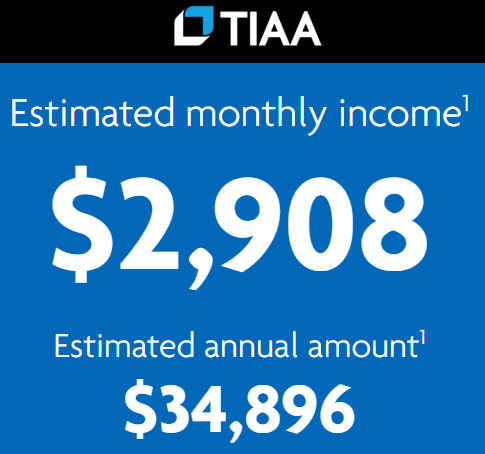 This income projection is not guaranteed, and would depend on the value of your contributions at the time you annuitize.

As an alternative, what if this investor instead invested this savings into a traditional retirement account and used low cost stock and bond index funds?

Over the next 30 years, even assuming just a 6% growth rate (below long term historical averages), their savings would grow to more than $857,000! 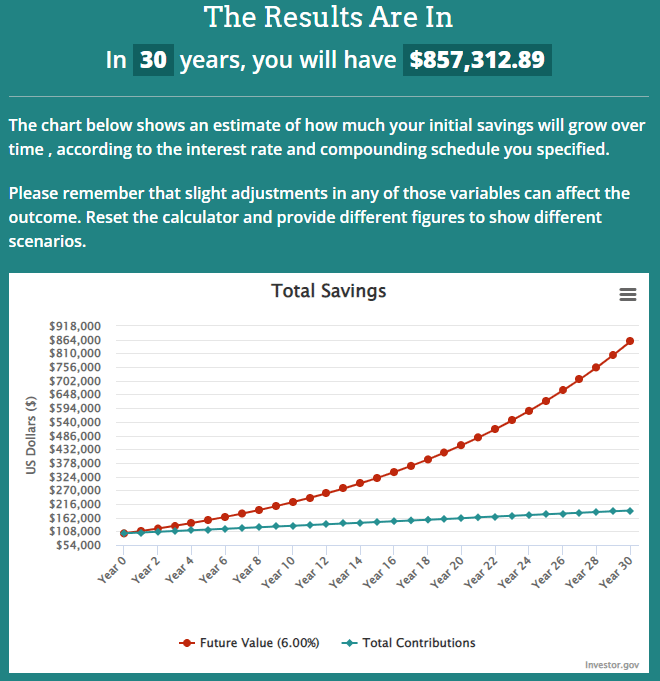 It is very likely that $857,000 could safely produce income in retirement in excess of the $34,896 that TIAA estimates. Even the very conservative “4% rule” says that $857,000 in savings would produce $34,280 per year in income. But in addition to that equivalent monthly income, the additional money would also be easily accessible if more was needed (like for the purchase of a retirement home).

We find that in general, young investors in particular are best suited to use other investment options instead of the TIAA Traditional annuity.

Is TIAA Annuity A Good Option for Retirees?

For this example assume:

Using the TIAA Annuity calculator, TIAA estimates that this investor would receive about $6,080 per month or $72,960 per year in retirement income. 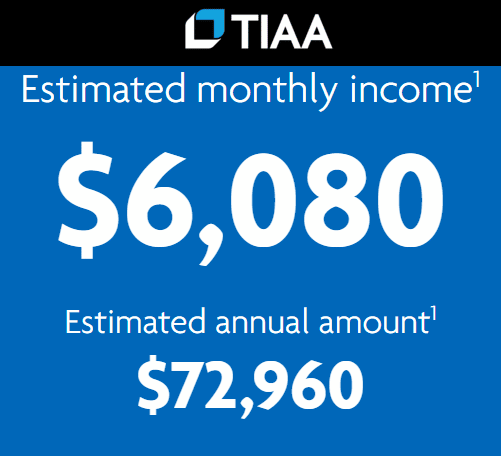 If we assume the same 6% growth rate for this investor, they would have approximately $1.44 million at time of retirement. 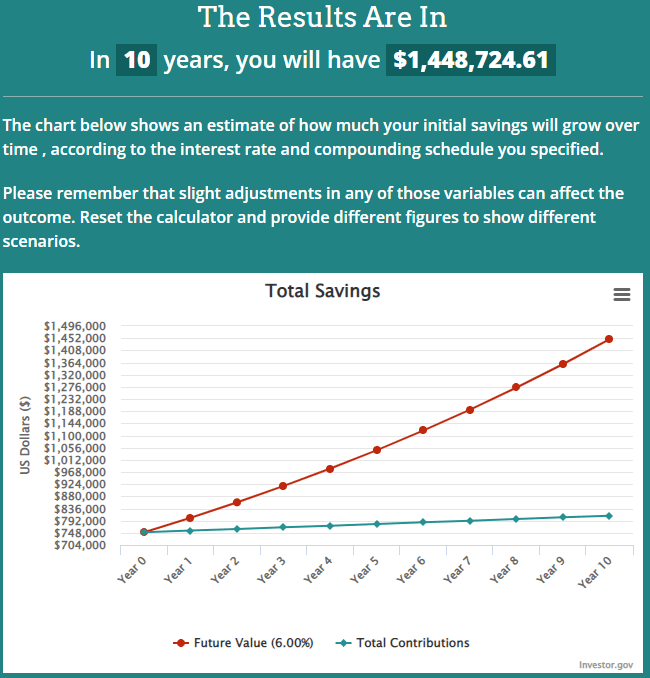 Even if we use the very conservative 4% rule, this investor could have income of $57,000 per year from their investments. Plus, they would have access to the remaining $1 million+ lump sum at any time.

Does that mean the TIAA annuity investment is the best option for this retiree since the payout is potentially higher? Not necessarily!

Understand that electing the TIAA annuity option comes with a few caveats that you have to be comfortable with:

Does this Belong in Your Retirement Portfolio?

As you can see, the decision to use the TIAA Traditional Annuity has many variables. We encourage you to spend the time to create a retirement plan that factors in other income sources, future spending goals, and a tax-efficient withdrawal plan before making an election into the annuity.

If you’re looking for ways to conjure up a game plan for your retirement income, feel free to set up a complimentary 30-minute meeting to discuss!