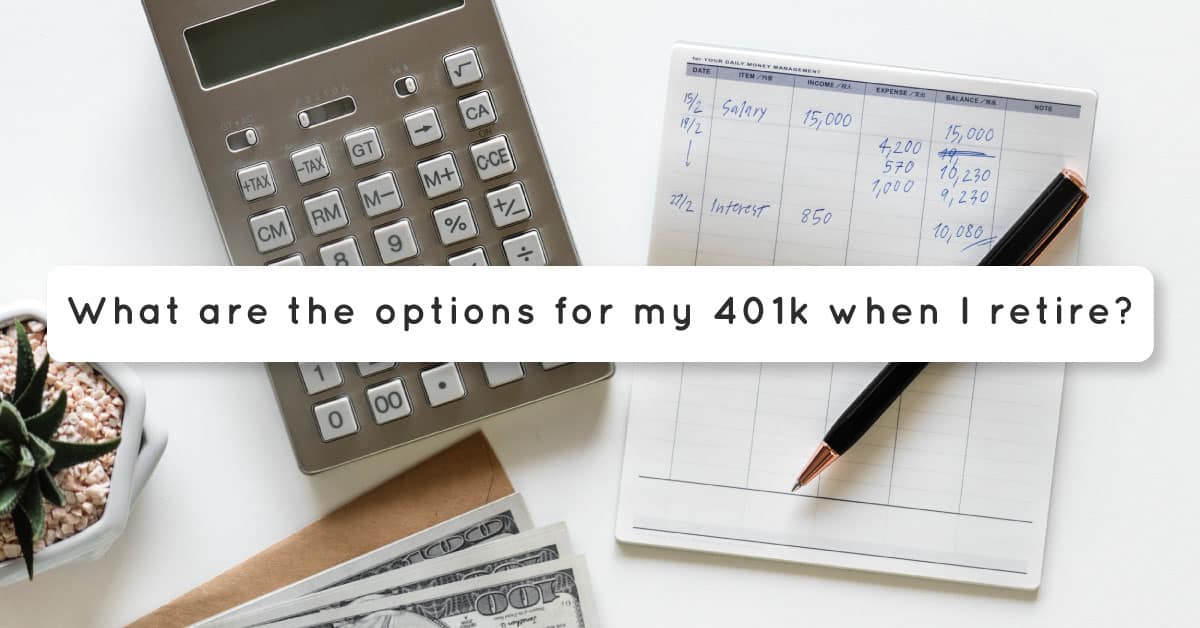 You’ve worked for decades, diligently put aside money in your company’s 401(k) plan, and now you’re ready to make the leap to retirement. What are your options for that big nest egg you’ve accumulated in the 401(k)?

Note: Get your hands on the plan document that governs your 401(k). Your HR department or third-party administrator (e.g. Fidelity) should have a PDF copy of it. 401(k) plans are governed by a set of rules in the ERISA law, so the plans are generally similar, but your plan document from your company will tell you exactly which options are available to you and how to make changes.

The Easiest (Laziest) Option—Leave the Money in the Account

Your former company doesn’t have to distribute the money to you. It can sit there and keep growing until you are required to take out money in the calendar year when you turn 70 and ½. You can also start taking money out (it will be taxed if it’s a traditional 401(k)) when you need it in retirement. If you’re not the kind of person who is comfortable making changes, this is a good option for you.

When is this a bad option? If your former company has a bad 401(k) plan, don’t leave the money there. How would you know? Bad 401(k) plans have few, expensive investment options. There are still companies out there who haven’t gotten the memo that dumping their employees into a poor 401(k) plan is a crummy and avoidable choice. The plan should offer low-cost mutual funds or ETFs (low-cost means their expense ratios are less than 0.5% per year) and have a variety that cover US and international stocks, in different sizes of companies (what we call “capitalization” or “caps”), as well as different bond funds.

I prefer to see Vanguard or iShare funds in the plan as options. It means the company is focused on providing broad coverage and low-cost funds, and so even though there are good competitors to Vanguard and iShare, it’s a hallmark of decent 401(k) plans.

Generally, if you’re at least 55 when you retire, you can withdraw the money from the 401(k) plan and do whatever you want with it. If the plan has a small balance (say $10,000), go right ahead. If this is your nest egg, though, and you have several hundred thousand dollars in it, watch out!

The main reason this is a bad idea has to do with taxes. If you take all the money out of a traditional 401(k) (not Roth), you’ll pay regular income taxes on that withdrawal. Do it all at once, and you’ve catapulted yourself into the top tax brackets. Your total tax bill will be huge that year, and much higher than if you spaced the withdrawals out over the course of your retirement when your income is lower.

The other potential downside is that you want that money to stay invested over the course of your retirement, and not just sit in your bank savings account. For most retirees, you need to keep investing throughout retirement, and having your nest egg out of the market can be a big mistake.

The Generally Best Option—Rollover to an IRA

Unless your former employer’s 401(k) was low-cost with good investment choices, the best course of action is to “rollover” the account to an Individual Retirement Account (IRA). This will give you more choices and control over how your money is invested, if you’re into that kind of thing (and again, if you’re not, it’s always an option to leave the money where it is).

A rollover is a specific creature. You first need to pick where the money is going to go—the destination IRA can be at Vanguard, Fidelity, Schwab, wherever. Those firms will have a procedure online that you can follow for initiating the rollover with your former company. The steps are not going to be complicated, but there’s one rule you need to follow—don’t have your former company distribute the money directly to you.  If they do, you have 60 days to put that money into the IRA, or it counts for tax purposes as a distribution to you (not good!). It’s not the end of the world, but far better for you to just initiate a true rollover with Vanguard/Fidelity/Schwab to your IRA.

Do you have to have an IRA already setup? Nope, not usually, but follow the online instructions.

Do you have a Roth 401(k) at your former company? Those are increasingly popular, and a Roth 401(k) is pretty much the same as a plain-vanilla (aka ‘traditional’) 401(k), except that you’ve already paid taxes on the money and you won’t be paying tax again.  If you have this kind of account, you have to do the rollover to a Roth IRA. Pretty simple, eh?

Keep in mind that the whole purpose for doing the rollover to an IRA is so that you have better fund choices (cheaper and broader).  If you don’t need that for your existing 401(k), don’t worry about doing a rollover—life is complicated enough already.

Do you have questions about your 401(k), or need a second opinion? Schedule a free, no obligation call with me to discuss your situation!